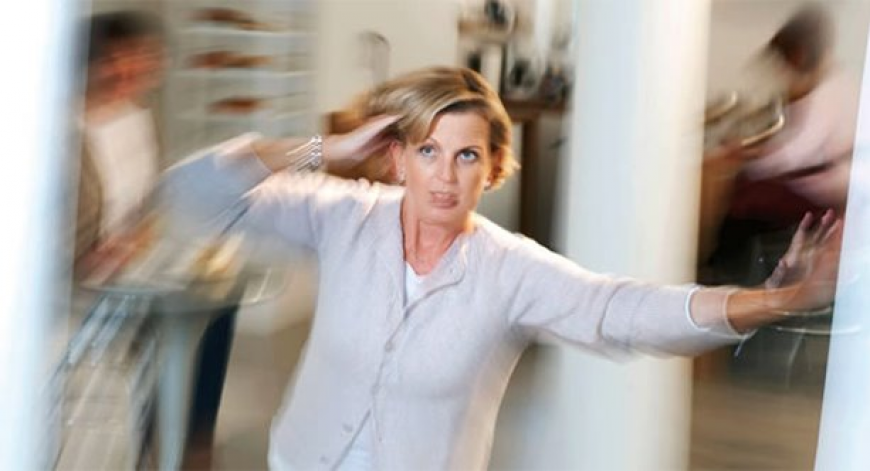 Sudden dizziness
Getting up abruptly or head rapid movement might cause a flood of unpleasant sensation. It feels as if the surrounding world is spinning. In order to keep the balance, it is necessary to find a physical support. Is it a familiar situation? It’s dizziness. Almost all people regularly experience it. What is this phenomenon connected with?? What are the causes of dizziness in men and women?

When does dizziness occur?
Dizziness is a rather unpleasant condition, during which a person, being immobile, feels objects revolving around him. This condition reminds riding a carousel. In medicine, dizziness is called vertigo.

As a rule, occasional dizziness is not dangerous for humans. It might be the result of certain safety factors. When the effect of these factors is over, the unpleasant feelings disappear completely. However, sometimes vertigo might indicate serious pathologies that require due and proper treatment.

Vertigo developing mechanism
Considering the vertigo from the head anatomy point of view, the reasons for dizziness are quite obvious. The vestibular system, which is responsible for maintaining human balance and orientation in space, is located in the inner ear. Vision and muscle reflexes help a person to orientate himself in the environment. All the received information enters the brain, and the latter controls the work of the vestibular system.

Sometimes the connection between the inner ear and the brain is interrupted. A person cannot orientate in space and dizziness occurs. In order to restore the broken connection, the brain immediately runs several reactions. Some of them might involve adjacent centers, such as vomiting. It leads to accompanying unpleasant symptoms.

The connection between the brain and the vestibular system is rarely disrupted and does not last long.

Dizziness is not considered as a pathology in the following cases.

Episodes of dizziness might occur as a response to certain medications. Often the source of unpleasant symptoms is side effect of antidepressants, antibiotics and anti-cancer drugs. When dizziness is caused by medication, be sure to consult a doctor to change it.

Causes of dizziness are not always harmless. Sometimes the condition can be caused by an illness. In this case, dizziness occurs quite often, it can last for more than few seconds. To fight against this phenomenon. it is necessary to consult a doctor. The symptoms can be reduced (and sometimes completely eliminated) only with proper treatment of the main disease.

Thus, the causes of dizziness can be the following pathologies.

Headaches can be caused by alcohol intoxication, dehydration or overheating of the body. Visual problems or ear infections might bring to these unpleasant sensations.

In some cases, vertigo is a result of serious conditions that require urgent medical care.

The causes of severe dizziness include:

It is almost impossible to determine the cause of frequent dizziness without specialist consultation. Therefore, patients with frequent vertigo are advised to see a therapist or neurologist. The specialist will thoroughly study the patient's complaints and suggest an appropriate diagnostic examination. If necessary, the doctor will refer the patient to an otolaryngologist, ophthalmologist, cardiologist or endocrinologist.

The following examination might be prescribed to the patient reveal the causes of vertigo.

To stop the dizziness quickly (if it is not caused by dangerous reasons) you can sit on any surface, relax a little and perform 5-6 deep inhalation-exhalation. Make sure to open the window (when in the building) to provide fresh air in the room. If the causes of vertigo are not caused by a major condition, these actions are enough to make the dizziness disappear quickly.